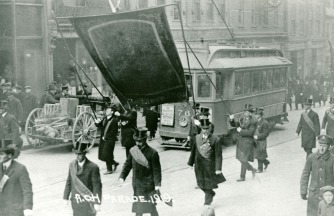 Irish immigration is often presented as a tragic epic in which victims of famine were forced to flee their homeland. The truth is otherwise. It is a tale of how hope and hard work gave Canada its stalwart Irish population.

Most of the Irish left of their own free will and financed their sea crossings themselves or were helped by family and friends to meet the cost. Far from being powerless victims, they planned their departure carefully and were highly knowledgeable on the economic advantages which Canada offered.

The Irish were the largest immigrant group to come to Canada in the 1800s. They were especially dominant in Ontario and New Brunswick and in Quebec they outnumbered the combined total of Scottish and English immigrants. 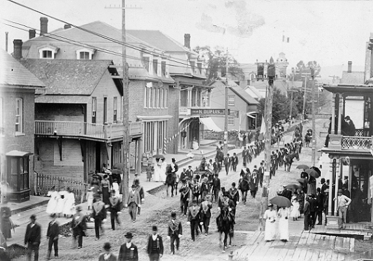 Photograph of members of the St. Patrick Society of Richmond in the Eastern Townships taking part in the SaintJean-Baptiste Day parade in the early 1900s.

The Irish influx began shortly after the ending of the Napoleonic Wars in 1815, when the United Kingdom was plunged into a deep economic depression.

Until 1830 Irish immigrants mainly originated from Ulster in the north, many being Protestants, but afterwards increasingly they came from the south and west, many being Catholics.

Each province has its own individual story. The fishing trade with Britain attracted the Irish to Newfoundland while a combination of the timber trade and farming attracted them to Nova Scotia, New Brunswick and Prince Edward Island in Atlantic Canada and to Ontario and Quebec in mid Canada.

The Irish headed west to the Prairie Provinces and British Columbia in the late nineteenth century, after sailing ships gave way to steamships and Canada had a transcontinental railway. However, before this happened, Irish settlers already living in eastern and mid Canada, moved west, even before the railways were built.

Follow the links to get to the individual provinces.