THE IRISH TO CANADA BOOK PAGE

In her three books on the Irish Lucille Campey describes the great Irish influx to Canada which began in the eighteenth century. The first book deals with Atlantic Canada, the second focuses on Ontario and Quebec and the third covers the whole of Canada. 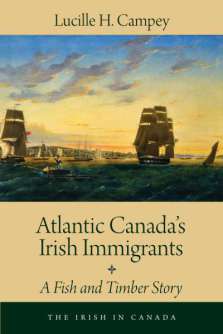 The book provides new insights on how, why and when Newfoundland, Nova Scotia, New Brunswick and Prince Edward Island came to acquire their Irish settlers. Using wide-ranging documentary and statistical sources, it identifies the areas of Ireland from which people came and traces their locations to the four provinces. It provides details of 780 sea crossings from Ireland to New Brunswick, 165 crossings to Nova Scotia and 85 crossings to Prince Edward Island and includes maps for the four provinces showing Irish settlement locations.

In his blog, Canada's Anglo-Celtic Connections, John Reid wrote that the book was "a mine of information for the family historian", while the Ontario Genealogical Society's reviews editor described it as being "of immense help in undertsanding the settlement patterns of the Irish in the Atlantic Provinces - and excellent work and well recommended". 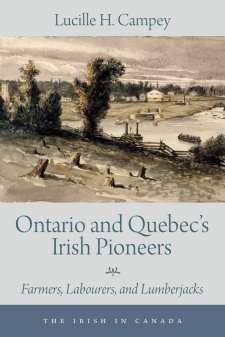 The book tells the story of the great number of Irish immigrants who came to live in Ontario and Quebec during the nineteenth century. By 1871 the Irish were the largest immigrant group in most parts of Canada. They founded many communities and had a huge impact on Canada's economic development.

The book gives details of the many Irish pioneer communities that formed and explains the factors which brought people together in the various locations. Detailed maps show where Irish settlers were concentrated in Ontario and Quebec while details of the ships which brought them across the Atlantic are also provided.

In his Anglo-Celtic Connections blog, John Reid described the book as "a valuable addition to the literature" on Irish immigration. An Ontario Genealogical Society reviewer found it to be "a pleasure to read, while being stacked with every source a reader could want". 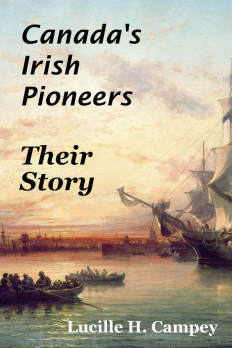 Canada's Irish Pioneers tells the story of the Irish immigrants who made a new life for themselves in Canada. The book incorporates material from Atlantic Canada's Irish Immigrants and Ontario and Quebec's Irish Pioneers, while also extending the geographical coverage to include the Prairie Provinces and British Columbia.

The book debunks the negative imagery put about by politically-motivated people who portray the Irish as self-pitying victims. It demonstrates that the Irish were ambitious, self-funded people who were desperate to escape from extreme poverty. They fought their way out of an oppressive system and found ladders of opportunity in Canada. Using wide-ranging documentary sources, the book sets out their great pioneering achievements across Canada and provides details of their many early communities.

In his Canada’s Anglo-Celtic Connections blog, John Reid commented favourably on the extensive subject coverage and attention to detail, adding – “There is a Kindle edition for an amazing $8 – well within the budget and a feast for all but the most impoverished Irish immigrant descendant.”. To read the full blog click here.

HOW TO BUY LUCILLE'S BOOKS

Lucille's three Irish books are available as printed books and as e-books.

They can be purchased on-line through Amazon.