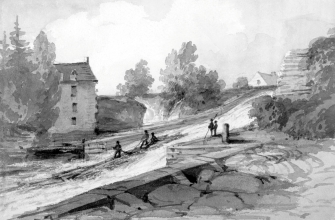 The Irish arrived in large numbers between 1817 and 1825 even before Ontario's internal routes had been built. Its good land, job prospects and climate made it the most popular destination. By 1850 Quebec and the Maritime provinces could no longer compete with it and increasingly lost their people to Ontario.

The Irish were particularly well concentrated in the Ottawa Valley which was the focal point of the region's timber trade. By 1881 people of Irish ancestry dominated 53 townships in an almost continuous line of settlements that straddled 8 counties.

The Irish had three important colonization leaders who helped them to found major communities in Ontario:

Peter Robinson who led hundreds of County Cork settlers to the Ottawa Valley and the Peterborough region in 1821 and 1823,

Richard Talbot who led a smaller group of Tipperary settlers to the Ottawa Valley and Middlesex County in 1818, and

James Buchanan who assisted hundreds of Irish people, living in New York in the USA, to relocate to Durham and Peel counties in 1816-1817. 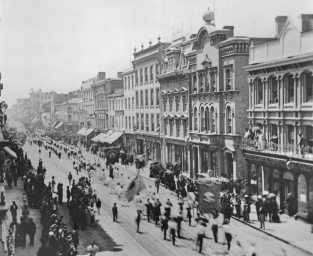 An Orabgemen's Parade photographed along Palmerston Avenue, in Toronto, c. 1900.

By 1881 Simcoe County's southern half was 60 % Irish and the county had the highest proportion of Irish in the whole of Ontario. This was mainly due to the fact that many Irish canal workers had worked in the building of the Erie Canal and after it was completed in 1826 had headed north to Ontario to take up farming.

In the 1850s many poor Irish were assisted through public schemes to come to Ontario where they found employment in the cities and towns.