THE IRISH IN MANITOBA AND SASKATCHEWAN

The Irish came to Manitoba and Sakatchewan in two phases. Irish migrants from Ontario, Quebec and the Mritime Provinces headed westward in the 1870s, travelling overland in carts before the railways were constructed. After this east to west migration later immigrants came directly from Ireland between 1904 and 1914. As a result, both Provinces experienced a dramatic rise in their Irish populations in the early twentieth century. Manitoba's Irish numbers increased by 60 percent and Saskatchewan's population went up by a factor of eight.

THE IRISH IN MANITOBA 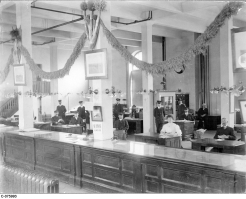 The Immigration Hall at Winnipeg in 1907 festooned with garlands displaying Manitoba's bounty.

The Irish were widely scattered across south western Manitoba.

The earliest major Irish community was the Boyne settlement, later known as Dufferin North. Located south west of Winnipeg, it was founded in 1871 by Ulster farmers. The nucleus of the settlement was the town of Carman.

Another but smaller Irish enclave developed near Crystal City to the south west of Carman, with many of the settlers being Ontario migrants.

The aptly-named Killarney settlement near the American border had many Irish settlers by the 1880s, although it was first settled by English, Scottish and Irish colonists.

THE IRISH IN SASKATCHEWAN 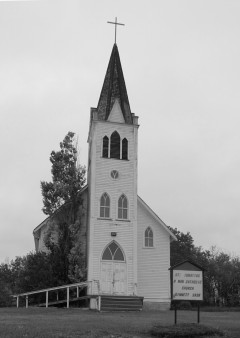 St. Ignatius Roman Catholic church at Sinnett which was built in 1928, replacing the earlier church built in 1908.

Saskatchewan acquired its Irish settlers from the 1880s, with most of the initial arrivals being migrants who relocated from Ontario, Quebec and the United States.

Saskatchewan place names - such as Limerick, Shamrock, D'Arcy, McGee, Glasneven, Carmichael, Skibereen, Lanagan, Griffin, Carnduff and Mullingar suggest a strong and early Irish presence in these locations, but this was always overshadowed by the later arrival of very large groups from England and mainland Europe.

The presence of wealthy Irish farmers from the early 1880s in Whitewood, southeast of Regina, owes much to the promotional efforts of the Canadian immigration agent based in Dublin.

An Irish Colony was founded at Sinnett, to the east of Saskatoon, in 1905 by Father John Sinnett, an Ontario-born priest of Irish ancestry. It attracted its Catholic settlers from other parts of Canada and the United States as well as from Ireland.